Advice from the top Entrepreneurs in the World 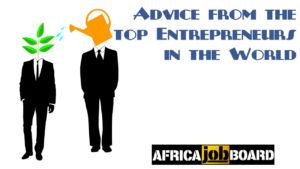 In need of some advice? Look no further! Here’s some advice from the top entrepreneurs in the world to inspire and motivate you in your personal and professional life.

Jeff Bezos is an American technology entrepreneur, investor, and philanthropist who founded online retail giant Amazon. Here are a few of his best quotes:

Who doesn’t know Oprah? Oprah Winfrey revolutionized the daytime TV format. In her spare time, this media mogul is a philanthropist, actress and producer. Here are a few of the things she learnt in her incredibly impressive career so far.

The Virgin Group’s founder, Richard Branson, is a business heavyweight. This British business mogul can also add investor and philanthropist to his titles. Here are some of the rules he lives by:

Ariana Huffington, co-founder of the Huffington Post, is a famed author, syndicated columnist, and businesswoman. Here are some of her best tips for success.

Sean Combs is more than just a rapper. The Harlem mogul holds many titles, including entrepreneur, record and television producer, songwriter, fashion designer and actor. Here are a few of his best advice:

What do you think  of this advice? Let us know in the comments below!