Advice from top Entrepreneurs in the World 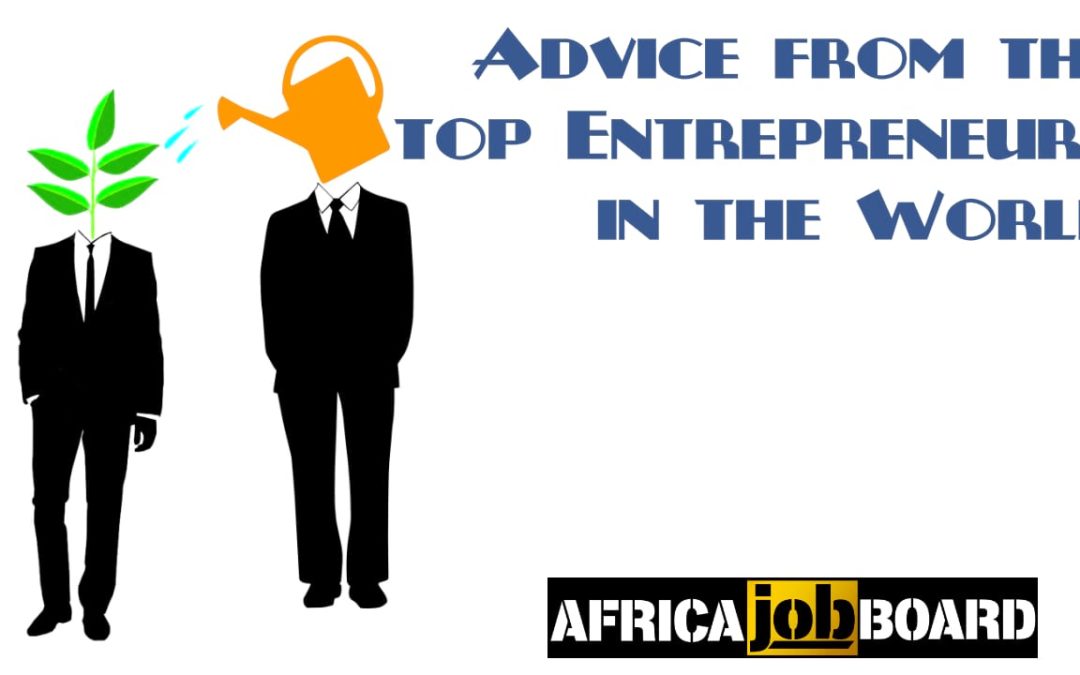 Entrepreneurs are some of the most determined and inspirational people around. Making a successful business out of something you love can prove to be challenging, especially when your don’t have the support of those around you. Below is a list of a few successful entrepreneurs who give advice on how to get ahead. Enjoy 🙂

Jeff Bezoz is an American technology entrepreneur, investor, and philanthropist who founded online retail giant Amazon. Here are a few of his best quotes:

“What we need to do is always lean into the future; when the world changes around you and when it changes against you – what used to be a tail wind is now a head wind – you have to lean into that and figure out what to do because complaining isn’t a strategy.”

“A company shouldn’t get addicted to being shiny, because shiny doesn’t last.”

“It’s not an experiment if you know it’s going to work.”

Who doesn’t know Oprah? Oprah Winfrey revolutionized the daytime tv format. In her sparetime, this media mogul is a philanthropist, actress and producer. Here are a few of the things she learnt in her incredibly impressive career so far.

“You can have it all. Just not all at once.”

“Challenges are gifts that force us to search for a new center of gravity. Don’t fight them. Just find a new way to stand.”

“The great courageous act that we must all do, is to have the courage to step out of our history and past so that we can live our dreams.”

The Virgin Group’s founder, Richard Branson, is a business heavyweight. This British business mogul can also add investor and philanthropist to his titles. Here are some of the rules he lives by:

“There is no greater thing you can do with your life and your work than follow your passions – in a way that serves the world and you.”

“When you’re first thinking through an idea, it’s important not to get bogged down in complexity. Thinking simply and clearly, is hard to do.”

“Education doesn’t just take place in stuffy classrooms and university buildings, it can happen everywhere, every day to every person.”

Ariana Huffington, co-founder of the Huffington Post, is a famed author, syndicated columnist, and businesswoman. Here are some of her best tips for success.

“We need to accept that we won’t always make the right decisions, that we’ll screw up royally sometimes – understanding that failure is not the opposite of success, it’s part of success.”

“Vision without execution is hallucination.”

Sean Combs is more than just a rapper. The Harlem mogul holds many titles, including entrepreneuer, record and television producer, songwriter, fashion designer and actor. Here are a few of his best quotes:

“At an early age, I started my own paper route. Once I saw how you could service people and do a good job and get paid for it, I just wanted to be the best I could be in whatever I did.”

“Take the craziest dream you ever had and go after it. Make it a reality. I don’t want you to dream, I want you to do.”

“I think sometimes people may think that I have too much passion, you know? I think that you have to believe. That’s one of my biggest mantras, believe. I wouldn’t be here if I didn’t believe in myself. I see these high mountains and they’re going up in the sky, and it kind of doesn’t scare me. I can’t wait to climb it, and go over the top and see what’s on the other side. And, you know, I have a quote: ‘Don’t be afraid to close your eyes and dream, but then open your eyes and see.”