Coding with a Nokia Phone

Coding on a Nokia Phone 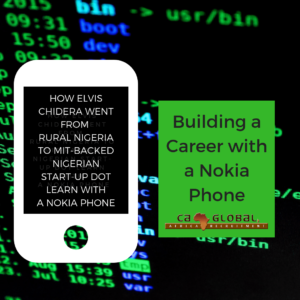 This young Nigerian proves that you do not need access to the best equipment to make something of yourself. Sometimes you just need ingenuity.

19-7ear-old Elvis Chidera is a developer from Lagos, Nigeria. He works at MIT-backed Nigerian start-up Dot Learn. But he did not get there the traditional way. He got there with a Nokia Phone.

Chidera grew up in rural southeastern Nigeria, where there is a lack of access to advanced technology. He was always interested in programming. Chidera began creating his own websites after Googling how to do it. He used W3Schools tutorials to learn the basics. But, because he did not have a computer to work on, he had to rely on his Nokia 2690. With this Nokia, he learnt basic programming language.

A few years later, Chidera became inspired by the movie, The Social Network and Mark Zuckerberg’s journey with Facebook. Chidera wanted to “go further and create something better”. He created his first official platform, a Facebook replica that would connect everyone, not just people who knew each other.

While this plan did not work out, Chidera did not allow himself to be deterred. His next app idea: an app that makes it easy to send text messages to multiple people at once and at an affordable price. With this plan, however, he needed to use Java, a different programming language to the one he had been using. Still without a computer, he resorted to building an app into his phone using the website J2ME SDK Mobile. Months of programming later, he was able to launch his new app at the age of 14. This app received moderate success. It had 5 000 users and gained a bit of local press. However, due to his inexperience, Chidera could not keep up with the size of his app and unfortunately had to shut it down.

From this point, Chidera realised that he would have to get a computer to move to the next step of his programming career. He began scrimping and saving wherever he could, cutting costs, asking relatives for help, selling personal belongings, and freelancing. Eventually, he raised enough money to buy a laptop, and immediately began creating android apps. By this point, he had graduated high school, and was looking for more freelance work. This is when he discovered Dot Learn.

Dot Learn works to solve the problem of access to online education by making educational videos extremely data-light -  as low as 1MB for every hour of video. Education being a cause close to his heart, Chidera jumped at the opportunity to work with Dot Learn. Through this company, Chidera has met some incredible people, and been able to participate in exciting competitions such as Techcrunch Battlefield Africa, Cisco Innovation Challenge, and the MIT Inclusive Innovation Challenge. The future seems bright for this young Nigerian.

And all of this just with a Nokia phone.