Degrees that make the most money in SA

Coding with a Nokia Phone
The 4-day work week

Degrees that make the most money in SA: 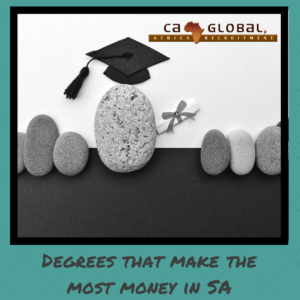 Interestingly, Career Junction’s list does not include other high-paying jobs such as lawyers, pilots and doctors. Those in the law field can fetch upwards of R350 000 -R1 million post-articles [Source: GRM Search]. Students enroll in either a 4-year LLB program or a general undergraduate degree and a 2 year LLB program. Commercial pilots can make up to R1.9 million in South Africa. Doctors can earn as much as R1.7 million a year. To become a commercial pilot, one must first complete a private pilot licence (PPL) before getting a commercial pilot’s licence (CPL) combined with an Instrument Rating. Doctors spend a minimum of 7 years studying before they begin earning as much.

Coding with a Nokia Phone
The 4-day work week