Professions with the most psychopaths

Ever wondered if your boss is a psychopath? Well, they just might be. 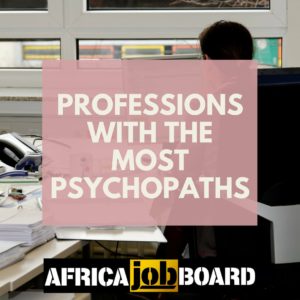 What is a psychopath?

The DSM-IV and DSM-5 Criteria for the Personality Disorders describes someone with a psychopathic personality type as a “pervasive pattern of grandiosity (in fantasy or behavior), need for admiration, and lack of empathy, beginning by early adulthood and present in a variety of contexts”. Even so, there is a difference between narcissism and a diagnosed psychopath, which makes it hard to diagnose a psychopath. Dr Tara Swart, neuroscientist, psychiatrist, and Neuroscientist in Residence at the Corinthia Hotel says that psychopathy is a spectrum we all fall on. The main determinant of a true psychopath is one’s inability to experience and express empathy. Research argues that the limbic system — the part of the brain associated with bonding, emotion, and memory, is damaged in psychopaths. Environment also plays a large part.

Psychopaths in the workplace:

According to studies, psychopaths tend to work in specific fields that compliment their mental health status. They are largely found in leadership positions because of the power and respect they receive in these positions. They also tend to be ruthless, cunning and charismatic, key characteristics of effective leaders. They prefer working alone over in a team. They are also calm in dangerous or heightened situations. In fact, they enjoy these types of situations as they can maintain order. Dr Swart argues that   “Psychopaths thrive on chaos, and they know other people find it very stressful.” She even states that “They will purposefully create chaos in the environment because they find it easier to cope than other people.” In some cases, these positions provide methods of exploiting others. They are very rarely found in careers that require empathetic responses, such as teaching, therapy or nursing. Kevin Dutton, a British psychologist and writer, says, “Functional psychopaths use their detached, unflinching, and charismatic personalities to succeed in mainstream society.” In his book, The Wisdom of Psychopaths: What Saints, Spies, and Serial Killers Can Teach Us About Success, he lists the key career fields psychopaths are most likely to be found.

These are the key career fields psychopaths are likely to be found:

3: Media person in TV or radio

Of course, the top spot would be CEO. This top ranking is because many psychopathic traits are rewarded in business. Remember the movie American Psycho? The film elegantly details the psyche of mergers & acquisitions (or murders and executions) CEO Patrick Bateman, one of the creepiest characters every written.

Of course, this list is all in jest, and does not necessarily mean that you are a psychopath if your work in these professions. Or maybe you are, and just don’t know it…

What do you think of this list? Let us know in the comments below!