The Republic of Congo Industry Opportunities

The economy thrives off a variety of elements; village agriculture and handicrafts, an industrial sector based largely on petroleum and support services. 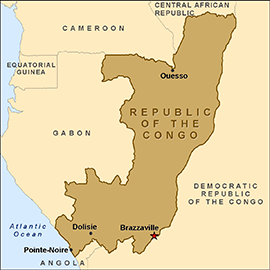 Petroleum extraction has supplanted forestry as the mainstay of the economy. In 2008, oil sector generated 65% GDP, 85% of government revenue, and 92% of exports.  Additionally, the country has great untapped mineral wealth. Oil is the backbone of the country’s economy and over the last several years the nation has put effort in attempting to make its financial transparency stronger in the sector.

The Republic of Congo offers tremendous opportunities to the business sector internationally and nationally. The economic landscape is still dominated by the petroleum industry, but other energy sectors such as timber, mining, agriculture, ICT, and tourism remain prosperous.

Mining in the Republic of Congo

The Mining of the Republic of Congo holds substantial potential. Diamonds and gold are mainly produced by small-scale and artisanal miners. Exploration for iron ore and potash resources has attracted interest from international investors and the development of these resources assist Congo in the diverse petroleum-based economy.

Oil & Gas the Republic of Congo

Congo’s economy is highly dependent on the oil sector, accounting for 80% of government revenues and 90% of total exports.  The Republic of Congo has partnered up with Angola and together they have set up plans to develop a deepwater oil field located in a Joint Development Zone. Congo and Angola agreed to boost exploration in the JDZ and production will start in 2015. Natural gas reserves are significant but underexploited, due to lack of infrastructure.  The government is looking to further develop offshore oil and gas fields. In addition to conventional oil, Congo has potentially significant deposits of oil sands.

Engineering in the Republic of Congo

The Republic of Congo has been totally active in restoring roads across the country as a means to improve security, rural development and food security.  The Republic of Congo has set up strong programmes as a means to improve the country’s infrastructure; The Agricultural Development and Rural Roads Rehabilitation Project (ADRRP