The coolest neighbourhoods in the world

What is the difference between a South Africa PEO and EOR?
15 Maya Angelou Quotes to Inspire You 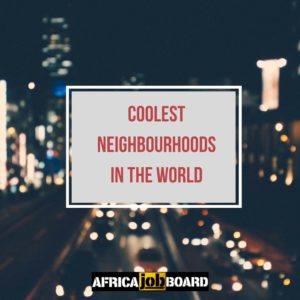 According to influential food travel and publishing company Culinary Backstreets, 2018 is the year of the neighborhood. The list consulted travel experts on their must-visit spots, and they chose neighbourhoods that are up-and-coming, with many local creatives. Here are their top picks for the coolest neighbourhoods in the world:

Of the neighbourhood, Culinary Backstreets says, “ Most locals know the Sants-Montjüic area as a place they pass through on their way to Barcelona’s main train station, but to us it represents something much deeper: A neighborhood where we can still experience the city’s original soul – culinary and otherwise.” Sants has been mostly untouched by Barcelona’s tourism industry, retaining its charm and traditional feel. Locals and family-run restaurants fill the area. Many entrepreneurs and locals live and work in this area.

Navy Yard is growing quickly, slated to develop 3 million square feet for residential and office buildings, pedestrian space and retail and dining for 2030—as well as its first hotel, the Thompson, according to Melissa Biggs Bradley, the founder of Indagare. The area is known for its culinary delights.

Amsterdam Noord is a cool, artsy Instagram paradise. The area is filled with old trams and shipping containers. Creatives and locals alike love the area for its laid-back, artsy vibe.

Getsemani gives tourists a glimpse of life in the city for locals. While there have been modern additions like stylish cafes and restaurants, the area still has a strong sense of local culture and identity.

‘Maboneng’ is a Sotho word meaning ‘place of light’. It has become a trendy, urban area filled with culinary, cultural and artsy stops.

Georgia has become a popular tourist destination this past year. It’s capital, Tbilisi, is a must see in the country. Locals still live traditionally in this area. Many of the buildings were renovated and converted, giving it an old town feel with a modern twist.

Once known as a dangerous, gang-ridden area, Casco Viejo has become a buzzy neighbourhood filled with locals. Old colonial buildings have been renovated and restored to new glory, making it a hip new spot.

District 5 provides a much more local, less-touristy experience of Saigon. Visitors can see beautiful temples and markets.  Some describe the area as a throwback to Old Saigon.

Keramikos is the perfect mix of old and new, traditional and modern Greece. Many young creatives and entrepreneurs have been attracted to the area for its low rent and old-time feel. Come here for the ultimate cultural and culinary experience.

Seongsu-dong is the vibey, cultural neighbourhood of every cool kids dreams. It has a thriving art scene, attracting photographers, artists and Instagrammers alike.

Pilsen is known for its cultural and artistic scene. the area is popular with local artists and creatives. Eastern European and Mexican immigrants have historicized the area, influencing its art and architecture.

Which cities do you think should be added?

What is the difference between a South Africa PEO and EOR?
15 Maya Angelou Quotes to Inspire You