The power of diversity and inclusivity in the workplace

‘Diversity’ and ‘inclusivity’ have become buzzwords that are constantly flung around by companies to show how progressive they are. But what do these words actually mean? And are companies living up to their statements? 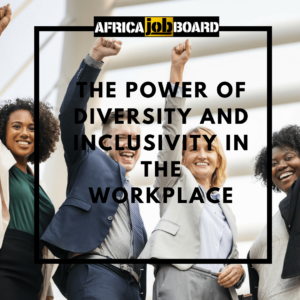 Diversity and inclusivity are about more than visual representation. It is about creating a culture that supports and builds up all employees. The first step to creating a diverse and inclusive space is acknowledging and accepting differences. Acting like cultural differences don’t exist can often be part of the problem, as it erases and devalues the experiences of people. This also hinders effective teamwork as it can build resentment between coworkers. So, instead of pretending we are all one and the same, we need to acknowledge and celebrate our differences, whatever they may be. Being different is not a terrible thing.

The Power of Visual representation:

The power of representation cannot be overstated. Especially in the case of children and young people, seeing yourself in people working in your desired career can be the greatest motivation. It says, “They did, so can I”. It helps you realise that your dreams are achievable. Consider the rise in women entering STEM fields. Years ago, these fields were not as popular, but representation and encouragement are leading to more women entering these fields. Imagine the power of a little girl seeing a woman CEO, or a black boy seeing a black lawyer. Visual representation can allow reveal the different options people have, ones they might not have considered before because they didn’t think it was realistic. So how do you achieve visual representation? Hire people of different backgrounds and abilities. Hire women. Hire people of colour. Hire people with disabilities, and people of different sexual orientation, sexual identity, and different age groups. Create a work environment where everyone, regardless of their backgrounds, can be found, seen and heard.

While visual representation is important, you must ensure that all these different employees are being treated with respect. By this, their various identities cannot and should not be used against them. Consider the Ashwin Willemse case currently playing itself out in South African news. Willemse has accused his SuperSport co-anchors of discriminatory behaviour towards him based on his race. In this example, while Willemse, a coloured ex-rugby player in a sport largely dominated by white males, has representation, his position has not been respected.

The Importance of Intersectionality:

Sometimes, people view things differently. This shift in perspectives can often a result of their intersectional viewpoint. In other words, the various identities intersect in ways that construct their understanding of the world. Consider your race, gender, age, sexual orientation, sexual identity, mental health, or bodily ability. How you understand the society and the workplace, its functions and your approach to issues can be affected by these identities. Issues that might have been non-issues in the past can be exposed with these different viewpoints. Consider the discrepancy between maternity and paternity leave policies. Or the presence (or lack) of handicap bathrooms in many workplaces. Or the misunderstanding of mental illness, an issue that can greatly impact on work ability. Having a diverse workplace can provide an intersectional approach to your work. This can help avoid discriminatory and public blunders.