Two weddings and an exam

SA product named one of the most genius in the world
Beach Please! Africa’s Best Beaches

What do you do if your wedding and final year exam is on the same day? You attend both! 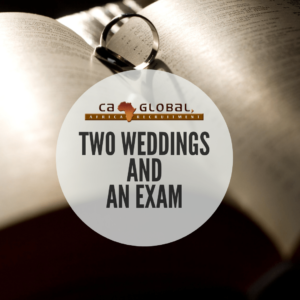 Due to a scheduling conflict, two Nigerian brides were left conflicted as their wedding and exam were scheduled for the same day. Dorcas Atsea and Deborah Atoh are both final year Mass Communications students at Nigeria’s Benue State University. Both women got a big shock when they found out that their final year “Media Ethics and Law” paper had been rescheduled. The paper, which had been scheduled for February 2018, had been rescheduled due to inadequate facilities at the Benue State University in Nigeria’s Middle Belt region. Unfortunately, this date happened to be on both of their wedding days. Both women had already sent out invitations and paid deposits, meaning there was no turning back without wasting money.

“My wedding was already fixed and planned before the exam,” Atsea told CNN. “I attempted to shift the exam, but to no avail.” She continues, “I went to the exam officer, she said I should choose between the two: the exam or the wedding,” Atoh said. “My wedding was already fixed and I already told people it was April 7 and sent out invitations, we decided not to change the date,” Atoh said.

According to Course lecturer Benjamin Ogbu, rescheduling again to accommodate the brides was not an option for the university. “It was not going to be fair to alter the timetable because of one or two persons, and usually it’s always a long process because you need to go through academic planning and the rest,” he said. “University system is such that you don’t have compassionate grants for people subjectively. If you do such, you compromise standards.”

So, they decided to do both. They would attend their weddings in the morning, then rush to sit their final paper at noon, then attend their wedding receptions in the afternoon. What would seem like a stressful situation was actually one of celebration. There was an atmosphere of jubilation in the exam venue.  “When I walked into the hall, for ten minutes everybody was just shouting before we started the exam and after the exam, I went back to the reception venue because my guests were waiting for me.”

What would you have done in that situation? Let us know in the comments below!

Are you currently in the job market? Check out our tips for the best questions to ask at the end of your job interview HERE.

SA product named one of the most genius in the world
Beach Please! Africa’s Best Beaches